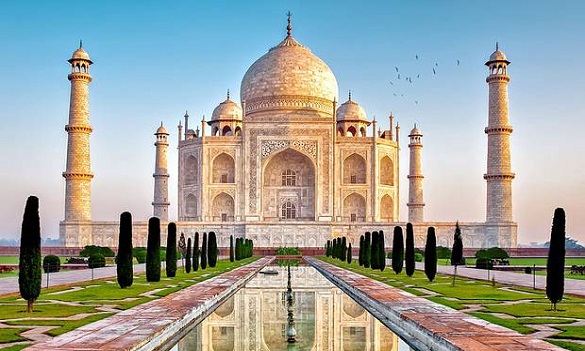 Day 01 -  Arrival transfer from Varanasi Airport / Station to hotel.
Varanasi, also known as Benares, Banaras, or Kashi, is the holiest of the seven sacred cities (Sapta Puri) in Hinduism and Jainism, and played an important role in the development of Buddhism. Hindus believe that death at Varanasi brings salvation. It is one of the oldest continuously inhabited cities in the world. Varanasi is also known as the favourite city of the Hindu deity Lord Shiva. Varanasi is also famous for housing numerous temples. Several temples in Varanasi have great religious and historical importance in Hinduism. There are many temples, erected at different times throughout the history of Varanasi. Some of the popular temples are listed herein. In varanasi you will visit the most famous temple such as Bharat mata madir (Mother india temple ) Durga temple, Tulsi manas temple, Sankat mochan temple , Banaras hindu University, New Kashi vishwanath  temple(also known as Birla temple ).
Later in the Evening visit Aarti ceremony, Experience the beautiful Hindu ritual Aarti on this evening tour in Varanasi, where Hindu mythology says the soul is liberated from the body. You'll learn about the combination of physical, metaphysical, and supernatural elements as you listen to religious songs sung in praise of the gods and watch lamps being raised into the sky on the River Ganges. O/night stay at  hotel.
Day 02 – Boat ride

Day 04 – Morning after breakfast visit the some of attraction point of Khajuraho The Khajuraho Group of Monuments is a group of Hindu and Jain temples in Madhya Pradesh, India, about 175 kilometres (109 mi) southeast of Jhansi. They are one of the UNESCO World Heritage Sites in India. The temples are famous for their nagara-style architectural symbolism and their erotic sculptures. Most Khajuraho temples were built between 950 and 1050 by he Chandela dynasty. Historical records note that the Khajuraho temple site had 85 temples by the 12th century, spread over 20 square kilometers Of these, only about 25 temples have survived, spread over 6 square kilometers. Of the various surviving temples, the Kandariya Mahadeva Temple is decorated with a profusion of sculptures with intricate details, symbolism and expressiveness of ancient Indian art. The Khajuraho group of temples were built together but were dedicated to two religions, Hinduism and Jainism, suggesting a tradition of acceptance and respect for diverse religious views among Hindus and Jains in the region.

AFTER ARRIVE IN KHAJURAHO PROCEED FOR THE FAMOUS S/SEEING OF KHAJURAHO (EASTERN & WESTERN TEMPLE ).
SUCH AS
KHAJURAHO TEMPLE
The name Khajuraho is derived from its Sanskrit nomenclature ‘Kharjuravahaka’ which is the confluence of two Sanskrit words ‘Kharjur’ meaning date palm and ‘Vahaka’ meaning bearer. There are about 25 temples spread over an area of approximately 6 square Km. The temples are grouped into three categories depending on their orientation – the Western Group of Temples, the Eastern Group of Temples and the Southern Group of Temples. These temples are dedicated to several Hindu Gods and Goddesses along with deities in Jain beliefs. Among the temples that are standing till now, 6 are dedicated to Lord Shiva, 8 to Lord Vishnu, 1 each to Lord Ganesha and the Sun God, while 3 are dedicated to Jain Tirthankaras. The largest of the temples is the Kandariya Mahadeo Temple that is dedicated to the glory of lord Shiva. It makes Khajuraho one of the four holy sites dedicated to the glory of Lord Shiva, the other three being Gaya, Kashi and Kedarnath.The temples are known for their elaborate and intricate carvings and sculpture. While these sculptures depict various scenes from everyday lives, the Khajuraho temples are primarily known for the artful and erotic depiction of the female form as well as various sexual practices of the time. The four Jain temples are primarily located among the eastern group of temples. The Parasvanath, Adinath, Shantinath and Ghantai temples are the ones dedicated to worshipping of the Jain Trithankaras. These temples were constructed by the Chandela rulers in deference to the flourishing practice of Jainism in central India during their rule.

Day 05 – Morning after breakfast drive to Khajuraho (305 kms / 6-7 hours ). Via Orcha.
Orchha, the capital of the mighty Bundela Rajput kings, spells history almost in every part of the city. The monuments here retain the historic touch to give tourists an insight into its rich past. The location of the city in itself is picturesque with hills and lush greenery around making it picture perfect. If you are a lover of nature or history or both, you are sure to fall for Orchha, the beautiful ancient land in Madhya Pradesh where many a battle were fought. Here are some of the leading attractions in Orchha.
On the way visit the seeing of Orcha such as ORCHA FORT. Orchha Fort is situated on the island on Betwa River. The scenic location apart, the fort has more to offer. It houses many palaces and temples. The three most important palaces seen here are Jahangir Mahal, Raj Mahal and the famous Rai Parveen Mahal. Jahangir Mahal reflects the architectural splendor that prevailed in Orchha in the past. The views from the multi-storeyed balconies in the palace are spectacular. Raj Mahal ranks amongst the most ancient historic monuments in Orchha fort. Rai Parveen Mahal, which is in ruins now was a beautiful palace with lush gardens surrounding it. Rai Parveen was a poetess and a dancer. Her charm so attracted the king Indramani who built the palace for her. Ram Raja temple, which is a very famous temple in Orchha was earlier a palace. This palace turned temple is the only place in which Rama is worshipped as a king and not a god.

Chaturbhuj Temple
Chaturbhuj temple was constructed by the famous Bundela Rajput kings in the 17th century. The architecture of the temple is exquisite. Architectural minds are sure to be inspired just by looking at the extior of the temple. It is said that the particular site of the temple was decided upon by the king to enable him to see god Krishna from the balcony of his palace. The views from the top floor of the temple are amazing. Also visit few more temple.
Later continue drive to Gwalior.
After arrive in GWALIOR leisure of the day later O/night stay at hotel.

Day 06 – Morning after breakfast visit GWALIOR FORT
GWALIOR FORT
Gwalior Fort (also known as Gwalior Qila) is an hill fort near Gwalior, Madhya Pradesh, central India, who surviving elements are from various periods, stretching back to the 8th century. The fort consists of a defensive structure and two main palaces, Gujari Mahal and Man Mandir, built by Man Singh Tomar (reigned 1486-1516 CE). The fort has been controlled by a number of different rulers in its history. The Gujari Mahal palace was built for Queen Mrignayani. It is now an archaeological museum. The second oldest record of "zero" in the world was found in a small temple, which is located on the way to the top. The inscription is around 1500 years old.
Teli Ka Mandir is an ancient temple that is undoubtedly famous for its splendid architecture. Located in the Gwalior Fort complex, Teli Ka Mandir can be reached easily by taking local means of transport from Gwalior. The English version of Teli Ka Mandir is Oilman's Temple. Built in 11th century, Oilman's Temple is the oldest temple of the Gwalior Fort.
Elevating to the height of 100 feet, Teli Ka Mandir is the tallest and most stunning temple in the confines of the Gwalior Fort. The temple is actually dedicated to Lord Vishnu in the form of his mount, Garuda. The colossal image of 'Garuda' (Mount of Lord Vishnu) is the major attraction of Teli Ka Mandir. This unusual image makes the circlet of the doorway, the highest structure in the Gwalior Fort.
LATER DRIVE TO AGRA (140 KMS / 3-4 HOURS ).

Agra THE TAJ MAHAL
The Taj Mahal meaning Crown of the Palace is an ivory-white marble mausoleum on the south bank of the Yamuna river in the Indian city of Agra. It was commissioned in 1632 by the Mughal emperor, Shah Jahan (reigned from 1628 to 1658), to house the tomb of his favourite wife, Mumtaz Mahal. The tomb is the centrepiece of a 17-hectare (42-acre) complex, which includes a mosque and a guest house, and is set in formal gardens bounded on three sides by a crenellated wall.Construction of the mausoleum was essentially completed in 1643 but work continued on other phases of the project for another 10 years. The Taj Mahal complex is believed to have been completed in its entirety in 1653 at a cost estimated at the time to be around 32 million rupees, which in 2015 would be approximately 52.8 billion rupees (U.S. $827 million). The construction project employed some 20,000 artisans under the guidance of a board of architects led by the court architect to the emperor, Ustad Ahmad Lahauri. The Taj Mahal was designated as a UNESCO World Heritage Site in 1983 for being "the jewel of Muslim art in India and one of the universally admired masterpieces of the world's heritage". Described by Nobel laureate Rabindranath Tagore as "the tear-drop on the cheek of time", it is regarded by many as the best example of Mughal architecture and a symbol of India's rich history. The Taj Mahal attracts 7–8 million visitors a year. In 2007, it was declared a winner of the New7Wonders of the World (2000–2007) initiative.
Later O/night stay at hotel.

Agra Fort
Agra Fort is a historical fort in the city of Agra in India. It was the main residence of the emperors of the Mughal Dynasty till 1638, when the capital was shifted from Agra to Delhi. The Agra fort is a UNESCO World Heritage site. It is about 2.5 km northwest of its more famous sister monument, the Taj Mahal. The fort can be more accurately described as a walled.
Later departure transfer from hotel to Agra airport / station.