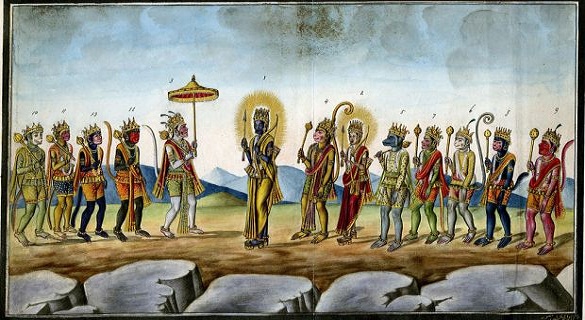 Day 01 -  Arrival transfer from Varanasi Airport / Station to hotel.
Varanasi, also known as Benares, Banaras, or Kashi, is the holiest of the seven sacred cities (Sapta Puri) in Hinduism and Jainism, and played an important role in the development of Buddhism. Hindus believe that death at Varanasi brings salvation. It is one of the oldest continuously inhabited cities in the world. Varanasi is also known as the favourite city of the Hindu deity Lord Shiva. Varanasi is also famous for housing numerous temples. Several temples in Varanasi have great religious and historical importance in Hinduism. There are many temples, erected at different times throughout the history of Varanasi. Some of the popular temples are listed herein. In varanasi you will visit the most famous temple such as Bharat mata madir (Mother india temple ) Durga temple, Tulsi manas temple, Sankat mochan temple , Banaras hindu University, New Kashi vishwanath  temple(also known as Birla temple ). Later in the Evening visit Aarti ceremony, Experience the beautiful Hindu ritual Aarti on this evening tour in Varanasi, where Hindu mythology says the soul is liberated from the body. You'll learn about the combination of physical, metaphysical, and supernatural elements as you listen to religious songs sung in praise of the gods and watch lamps being raised into the sky on the River Ganges.O/night stay at  hotel.
Day 02 – Boat ride

Day 03 – Morning after breakfast proceed for RAMNAGAR
Ramnagar
The Ramnagar Fort is a fortification in Ramnagar, Varanasi, India. It is located near the Ganga River on its eastern bank, opposite to the Tulsi Ghat. The sandstone structure was built in the Mughal style in 1750 by Kashi Naresh Raja Balwant Singh. At present, the fort is not in a good shape. It has been the home of Kashi Naresh since the eighteenth century. The current king and the resident of the fort is Pelu bhiru Singh, who is also known as the Maharaja of Varanasi even though this royal title has been abolished since 1971. O/night stay at hotel.
Day 04 – Morning after breakfast drive to Bodhgaya (247 kms / 5-6 hours) .
BODHGAYA-
Bodh Gaya is a religious site and place of pilgrimage associated with the Mahabodhi Temple Complex in Gaya district in the Indianstate of Bihar. It is famous as it is the place where Gautama Buddha is said to have obtained Enlightenment (Pali: bodhi) under what became known as the Bodhi Tree. For Buddhists, Bodh Gaya is the most important of the main four pilgrimage sites related to the life of Gautama Buddha, the other three being Kushinagar, Lumbini, and Sarnath. In 2002, Mahabodhi Temple, located in Bodh Gaya, became a UNESCO World Heritage Site.
After visiting B.gaya visit the local seeing such as Mahabodhi Temple
The Mahabodhi Temple (literally: "Great Awakening Temple"), a UNESCO World Heritage Site, is an ancient, but much rebuilt and restored, Buddhist temple in Bodh Gaya, marking the location where the Buddha is said to have attained enlightenment. Bodh Gaya (in Gaya district) is about 96 km (60 mi) from Patna, Bihar state, India. O/night stay at hotel.

Day 05 – Morning after breakfast visit some local places in Bodhgaya  such as  Bodhi tree as Bodhi tree.

The Bodhi Tree also known as Bo (from Sinhalese: Bo) and "peepal tree" was a large and very old sacred fig tree (Ficus religiosa) located in Bodh Gaya, under which Siddhartha Gautama, the spiritual teacher who later became known as the Buddha, is said to have attained enlightenment (Bodhi). In religious iconography, the Bodhi Tree is recognizable by its heart-shaped leaves, which are usually prominently displayed. The term "Bodhi Tree" is also widely applied to currently existing trees, particularly the Sacred Fig (Ficus religiosa) growing at the Mahabodhi Temple in Bodh Gaya, which is often cited as a direct descendant from the original specimen planted in 288 BC. This tree is a frequent destination for pilgrims, being the most important of the four main Buddhist pilgrimage sites. Other holy Bodhi trees which have a great significance in the history of Buddhism are the Anandabodhi tree in Sravasti and the Bodhi tree in Anuradhapura, Sri Lanka. Both are believed to have been propagated from the original Bodhi tree. Later drive to Allahabad( 380kms / 7-8 hours).later O/night stay at hotel.

Day 06 – Morning after breakfast visit some local attraction.
Allahabad - Allahabad or Prayag, is a large metropolitan city in the Indian state of Uttar Pradesh and the administrative headquarters of Allahabad District, the most populous district in the state and 13th most populous district in India and the Allahabad Division. The city is the judicial capital of Uttar Pradesh with Allahabad High Court being the highest judicial body in the state. As of 2011, Allahabad is the seventh most populous city in the state, twelfth in the Northern India and thirty-sixth in India, with an estimated population of 1.11 million in the city and 1.21 million in its metropolitan region. In 2011 it was ranked the world's 130th fastest-growing city. Allahabad, in 2013, was ranked the third most liveable city in the state (after Noida and Lucknow) and twenty-ninth in the country. After arriving in Allahabad visit the attraction point in Allahabad such as Trivedi Sangam, In Hindu tradition Triveni Sangam is the "confluence" of three rivers. Sangama is the Sanskrit word for confluence. The point of confluence is a sacred place for Hindus. A bath here is said to flush away all of one's sins and free one from the cycle of rebirth.
Anand Bhawan -
The Anand Bhavan is a historic house museum in Allahabad, India focusing on the Nehru Family. It was constructed by Indian political leader Motilal Nehru in the 1930s to serve as the residence of the Nehru family when the original mansion Swaraj Bhavan (previously called Anand Bhavan) was transformed into the local headquarters of the Indian National Congress. Jawahar Planetarium, the planetarium is situated here, which has been striving to inculcate scientific temper among masses through its sky shows on astronomy and science. Anand Bhavan was donated to Indian government in 1970 by the then Prime Minister Indira Gandhi, the granddaughter of Motilal Nehru and daughter of Jawaharlal Nehru. Also visit rest of the place like Chandra shekhar azad park.

Later drive to Ayodhya (198 kms / 4-5 hours ). Later visit the most attraction point of Ayodhya such as RAM JANMABHUMI TEMPLE

Ram Janmabhoomi Temple
The area although has been a center of dispute since the destruction of the Babari Masjid, the Ram Janmabhoomi Temple is one of the major attractions in Ayodhya. The place is considered to be the birthplace of Lord Ram the 7th incarnation of Lord Vishnu. The original temple was said to have been demolished by the Mughal emperor Babur in 1528 AD and built a mosque at the site. The mosque however was demolished in 1992 and the area has since been a ground of dispute among the Hindus and the Muslims in India.
Later visit  Moti Mahal One of the fine specimens in Mughal Architecture, the Moti Mahal was the residence of wife of Nawab Shuja-ud-daula and was constructed in 1743 AD. The palace is situated in the nearby town Faizabad and is famous for its unique architecture and is frequented by many tourists. O/night stay at hotel.

Ram ki Paidi at Ayodhya
Ram Ki Paidi is the attractive bathing ghat built for the convenience of multitude of Ram devotees to have a sacred bath in holy Sarayu waters. Ram ki Paidi was constructed during 1984 near Nayaghat on the banks of river Sarayu in Ayodhya in Uttar Pradesh. Here we find number of ghats, which are crowded during festival days and in other days in normal number of devotees taking bath to wash of their sins. That means Sarayu would take their sins and while so purifying them she becomes impure for getting all their sins to become a greater sinner and ultimately carries it to the sea to make the sea water more Salter than what it is.
Hanumangarhi
Hanumangarhi is a temple of Lord Hanuman in Ayodhya. More than 70 steps lead to the main Hanuman temple which is one of the most popular temples of Lord Hanuman in North India.It is a custom that before visiting lord Ram temple one should first pay visit to shri lord Hanuman temple.also visit some other attraction, O/night stay at hotel. Later  drive to Varanasi (290 kms /6-7 hours ) for departure.